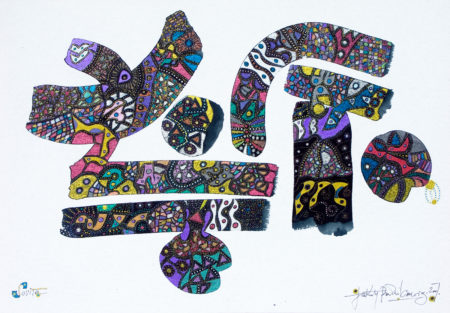 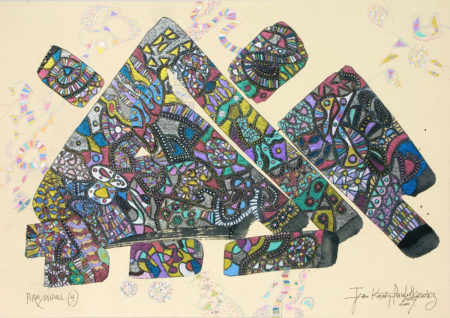 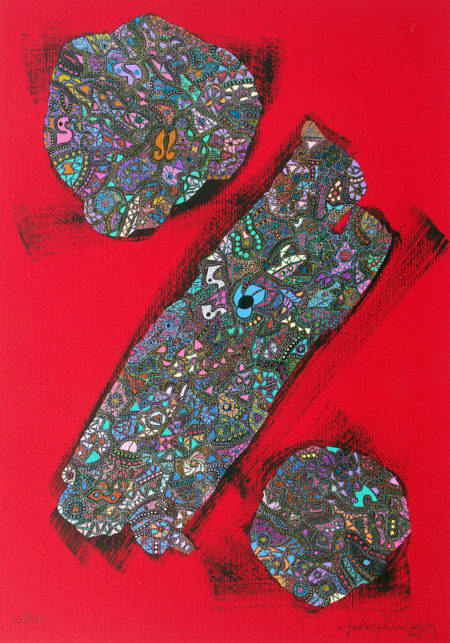 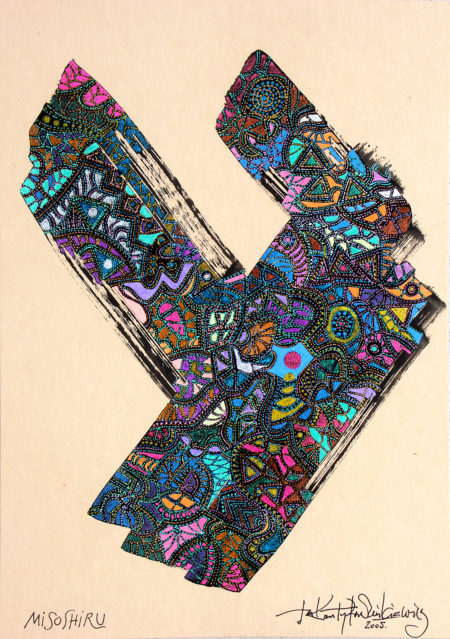 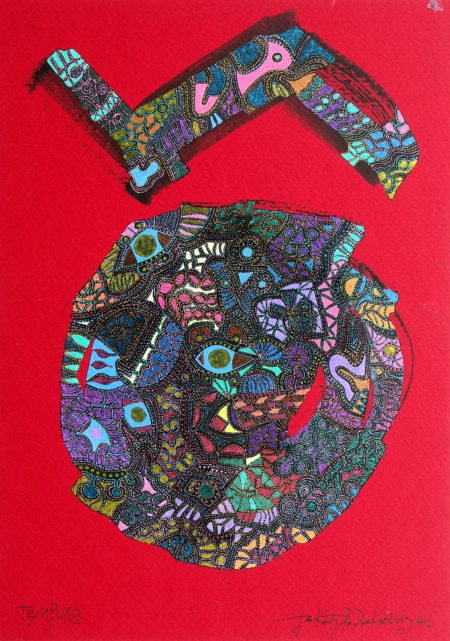 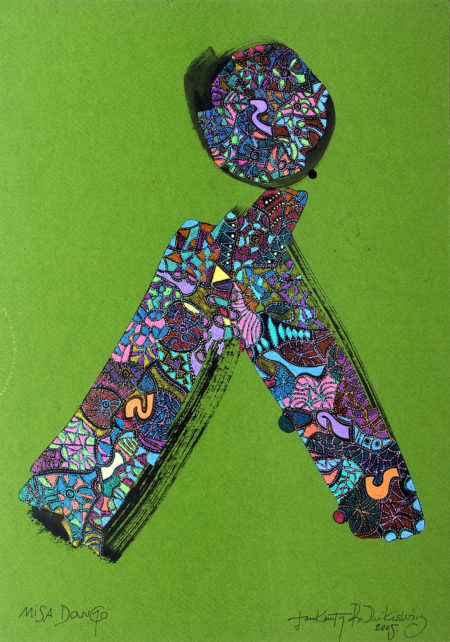 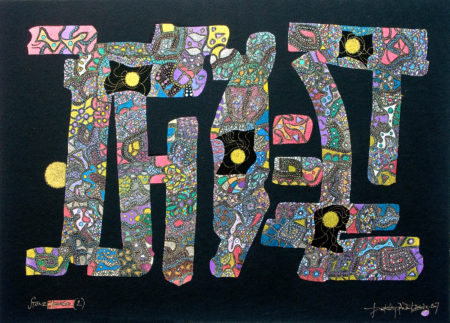 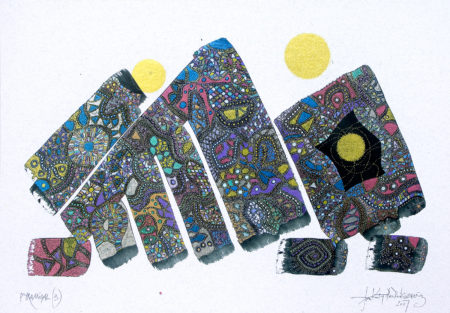 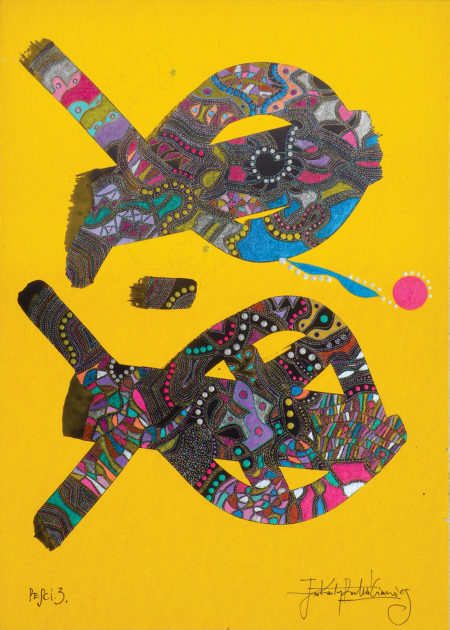 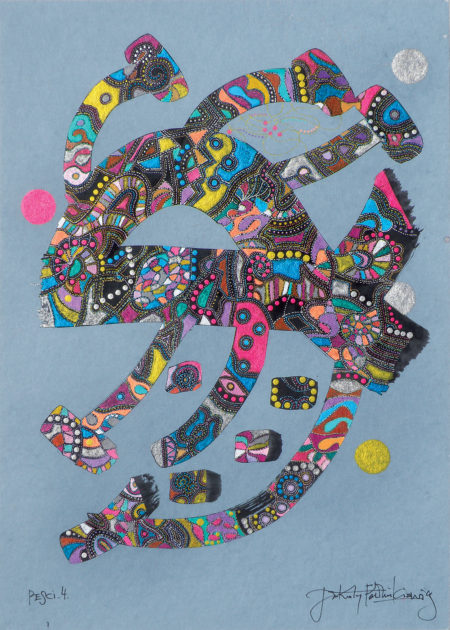 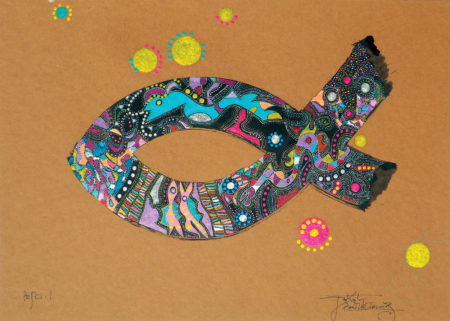 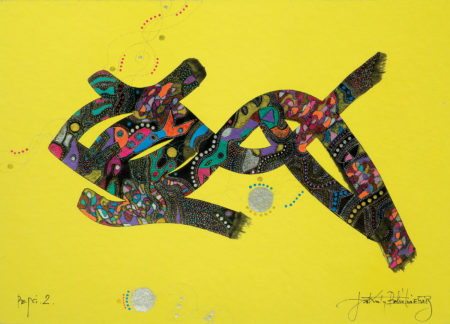 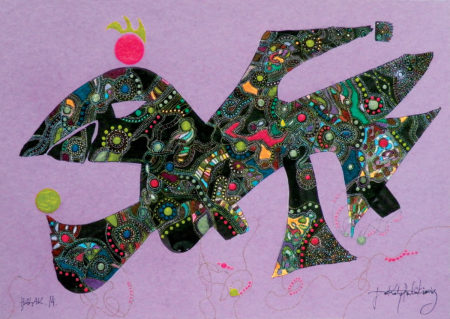 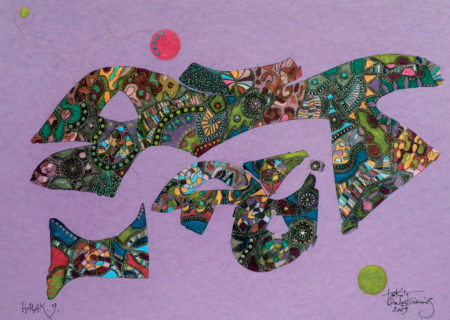 In this intriguing and complex title the author included the creed of his artistic activity. He found the point of the initiation and development of gel-art. He created the pieces. He noticed the infinity of creative dreams. Once he said to me that an exotic titles were loose and disobliging. Now, from the perspective of time, looking at the artist as he was creating new works, I can see that his titles are carefully thought out and meaningful. The binding element of all the pieces from this series is an extraordinary consequence of form. Abstract and at the same time representative, dynamic and stable, simple and subtly constructed, multi-coloured but subordinated to the surface of the smooth background which can be red, violet, green, blue, black, white, pink, or grey. Now the artist communicates with us just like he did with Kazimierz Kutz about the soundtrack. By means of gel-art “bugs” he shows us the subjects and by means of backgrounds he expresses the mood – pompous or humorous, cold, warm or completely neutral. “Senses – Beings –Mares” are the author’s artistic vision – truly authentic. Initiated in 2003, it constantly opens new chapters. “Tegorihota”, “Gyoza Yaki”, “Tego Taho”, “Tonjiru”, “Hiasa”, “Hirashi Sushi”, “Hotategori” – the titles the artist borrowed from Japanese cuisine. They not only sound suitable but also look like unusual decorations on geisha’s kimonos. They become ornate calligraphies of our ideas about the culture and art of Japan. Next series entitled “Pyramidal” has a very similar impact on the viewer. Pyramidal forms isolated from the background became symbols of the power of human thought and work. Particles of gel-art enclosed within the architectural outline march one after the other just like disciplined hieroglyphs engraved on the stone slabs, which were transported to the collection of the British Museum. “The Stonehenge”, on the other hand – the megaliths of faith – illustrates the greatness, which would not exist without thousands of particles – delicate and meaningless if single-handed. Still, there are also less meaningful pictures, which have a more decorative purpose, such as “Araignee” (Spider’s web), and marked with subsequent numbers, “Voyage”. Creatures and fish – “Halaki” – refer to the author’s personal theory about the fish’s ideal build, of which he has spoken in an interview “My Idol Crucian”. Jan Kanty loves animals. He has got a dog and two cats on a couch.

This site uses cookies. If you agree to save information contained in cookies, click on „×” in the upper right corner of this information. If you do not agree, you can change cookie settings in the options of your browser. Detailed information about how we use cookies and the rules for processing personal data can be found in our privacy policy.